As of Monday, Google has confirmed a huge adjustment to search results: right hand rail ads are disappearing.

Last week, on Feb. 18, a dramatic increase in SERPs (marketing lingo for Search Engine Results Pages) with four ad positions, as well as a slow but noticeable decline in right rail placement, led many PPC leaders to question if the change was finally happening. Hinted at last December, when Google began beta testing four ad SERPs alongside Shopping PLAs across a very limited number of results, this update is a game-changer for search engine marketing as a whole.

Google claims the new layout will help searchers find (read: click on) more relevant and engaging content. But the change suggests an effort by Google to standardize the advertising ecosystem across all devices – mobile, desktop, and tablet – by serving the same number and style of ads in the top results. While this makes room for a variety of right rail results such as Knowledge Panels and Shopping PLAs on desktop, the effects on paid advertisers will be swift and global. 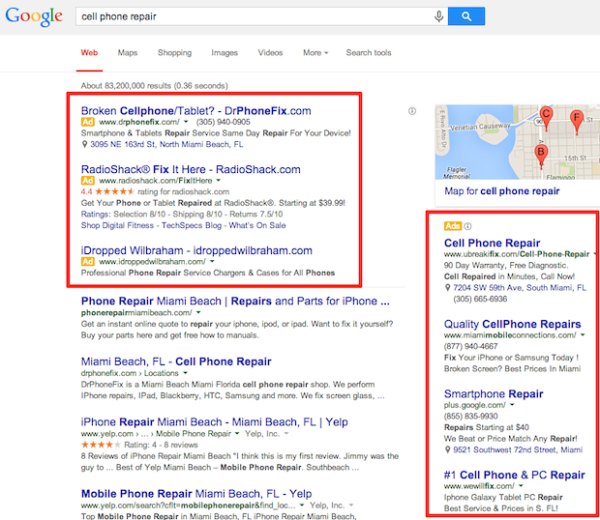 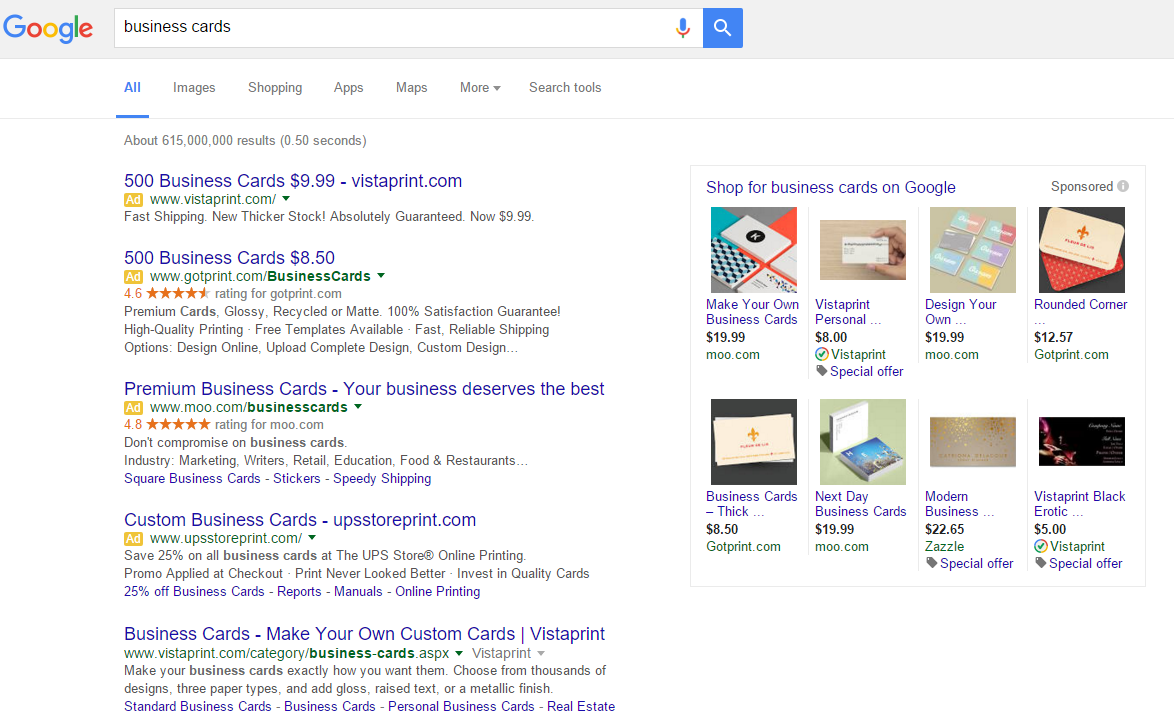 So what do the changes mean for paid search? Here are the most dramatic potential changes:

How does the Google Ad Layout Impact Paid Search?

It’s estimated that 85 percent of clicks came from the top ads and only about 15 percent came from the side and bottom ads.  The data shows that right rail ads have a much lower likelihood of a click regardless of position, and the fight has always been for top three spots.

So now we’ll have an extra spot to bid for, as well as shopping PLAs and Knowledge Graphs on desktop (when applicable). Quality Scores and efficiencies will be more important than ever, and other factors such as search relevancy and ad copy, are expected to become increasingly more influential in advertisers’ ability to efficiently maintain position in the top four ad spots, while successfully driving traffic to their site.

Google is telling us loud and clear that good, relevant ads will be rewarded with coveted top positions for an affordable price. All you have to do is listen!

Interested in learning more in paid search and SEO trends? Read more from our blog, View from the Charles:
How to Launch Smarter Campaigns with Google Customer Match
Optimizing for Voice Search

How to Launch Smarter Campaigns with Google Customer Match

Customer Match gives advertisers an incredible new tool that allows them to leverage their own CRM data to target with pinpoint accuracy and deliver extremely relevant messaging to existing and potential customers.

As an agency we started getting familiar with this concept through Facebook’s Audience Targeting, which gives advertisers the ability to upload their email lists into the Facebook Ads platform, and serve ads to users on those lists. We’ve seen some great successes with clients across a number of industries, so we’re very excited that something similar will be available within Google.

How Does Google Customer Match Work?

Customer Match creates targeted lists for campaigns across Google-related channels: Google Search, YouTube and Gmail. You upload your customer information, such as e-mail addresses, and this tool helps you build customized experiences for them.

Here are the basics of how it works:

Customer Match can serve multiple marketing objectives. Among its key benefits, you could use it to:

How We Use Customer Match at Charles River Interactive

We’ve helped a number of our clients get a jump on advertising with Customer Match already. Some examples include:

Interested in learning more about SEO and paid search trends? Read more from our blog, View from the Charles:

It took a week’s worth of bad news to make people talk about Twitter again. Today, you’re probably hearing a lot about the future of Twitter, and wondering whether it has one.

From the #RIPTwitter backlash to news that user growth has “come to a halt” – as a few media outlets put it – the company is fighting to prove it’s still relevant.

If you’re a marketer, you want to know what all of this might mean for your brand engagement on Twitter. Here’s what you need to know:

Twitter User Growth
Twitter released its fourth quarter earnings report late Wednesday. Not only has the company failed to increase new users since it went public, it has actually lost monthly active users from the previous quarter, according to news reports. Investors were clearly disappointed, as stocks fell in after-hours trading.

The timing couldn’t have been worse, as it arrived on the heels of the #RIPTwitter drama. The company’s fight is now two-fold: Proving itself to investors and preserving the loyalty of the angry users it desperately needs.

#RIPTwitter: What Does it Mean?
Twitter has been hinting for a year that an algorithm was in the works. On Friday, Buzzfeed broke the news that it would be introduced this week, sending the twittersphere into a frenzy. Enraged users created the #RIPTwitter hashtag to protest the change, officially announced Wednesday.

Why the revolt? Users say Twitter is copying the Facebook playbook. Until now, the real-time Twitter feed has been its key differentiator, setting it apart from other platforms. Now, users worry the algorithm will vet everything they see.

What is an Algorithmic Timeline?

How Does the Twitter Algorithm Impact Brands?
So die-hard Twitterheads are upset. As a marketer, should you be, too? It doesn’t look that way.

That means you should continue to invest in and distribute high-quality content. And who knows, maybe these changes will actually help you reach more people – that is, if Twitter makes good on its promise to Wall Street for user growth this winter.

Interested in learning more about social media trends? Read more from our blog, View from the Charles:

How to Use Snapchat for Your Brand

Today, Snapchat has begun to emerge as a legitimate social network that brands and agencies cannot ignore. Consider these stats from Snapchat:

According to these numbers, Snapchat is growing up. And for smart marketers, it presents a key opportunity to reach a coveted demographic.

Founded in 2011 by three Stanford students, Snapchat had a clear goal: Provide a social media platform where posts, pictures and opinions shared “in the moment” would not haunt a user’s online reputation forever. It promised the ability to be spontaneous and honest without those 2 a.m. college posts popping up during future job interviews.

How Does Snapchat Work?

Snapchat is a smartphone app that allows its users to take pictures and video, add filters, text and emojis, and share them directly with friends.

The key to Snapchat’s appeal – and success – is its short window: No post lasts longer than 24 hours, and some disappear in seconds. This is important because it builds an engaged audience. Users keep checking in so they don’t miss posts and because they can only see them once, they make it count.

Snapchat and Marketing: What You Need to Know

Snapchat provides advertising opportunities with their Discover section, which is populated by big name publishers like ESPN, VICE, Wall Street Journal and many more.

While Snapchat is still in the early stages of growth, I’m seeing more and more 30+, 40 + individuals creating and sending snaps to their friends and colleagues. With every image having a permanent home elsewhere, sharing “of the moment” images/video to friends creates more of an intimacy with your friends. However as the user base of Snapchat moves to an older demographic, having opportunities to deliver your message to where the attention is of your audience will further validate using Snapchat as one of your social media channels.

Interested in learning more in social media trends? Read more from our blog, View from the Charles:

The Rise of Mobile Chat Apps